When Our Tweet is Too Long, We'll Have to be More Clever

Have you tried tweeting from the web with over character? What will happen? I don't know whether this is new or just me who just realize this. But I tried to tweet longer than the character limit - which is 140 char - and this is what happen. 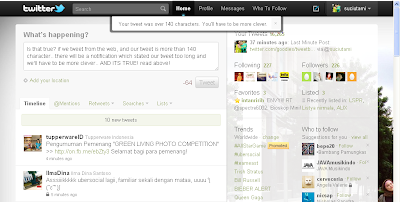 It says, "Your tweet was over 140 characters. You'll have to be more clever"
Ahahahaha.. cool.. sounds sarcastic for those who use particular twitter's application which featured and allowed to tweet more than 140 characters.